Go ahead, who among you has not aspired to be taken for Captain Haddock when you were young, and in their way pour forth a torrent of picturesque profanity??? Humm?

Anyway, here’s 2 small marine T-shirts, perfect for this kind of exercise, even though my 2 “Pitchous” are still unaware of the existence of the infamous Captain. 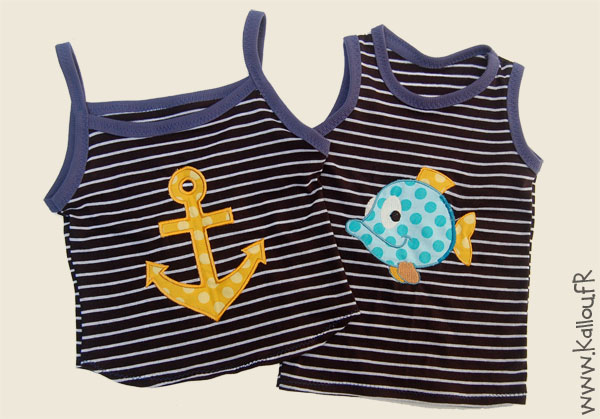 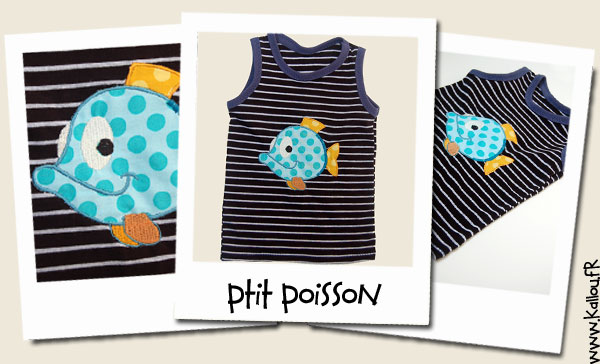 Small version T-shirt for Florent with a small fish which has a cheerful friendly face like his!

The striped jersey is from Joann’s- with a 60% discount, I took all the end of the roll, so you will see this fabric again!

And the fish applique is from the designer planet Applique. The polka dot fabric are from Michael Miller, my fave of faves!!!

An improvised pattern by Kallou that is just on the dot!

Version Tank girl with a yellow anchor for Aline.

The same striped jersey used for Florent’s shirt- so no reason to be jealous, and everybody is happy.

It’s the Brooklyn pattern from the famous book “Sewing Clothes Kids Love”, – for those who asked, this book costs approximatively $25, not 50 or 75 Euros like some are trying to sell on certain sites!

The top is short enough, which allows to enhance my Philadelphia skirt from chez C’est Dimanche. The anchor is also from the designer Planet Applique.

I like appliques, It’s quick to make, and on jersey fabric, it’s perfect: there is no risk of deformation or holes, unlike with the too dense point motives (designs).

And what do my Freshwater Swabs think of that? Well, they adopted it, and even agree to get on the rail of the garden for a friendly photo shoot! 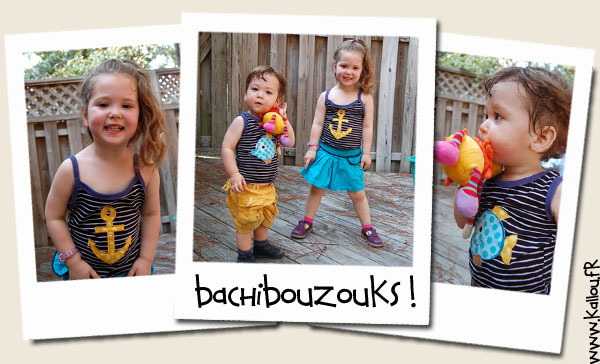 I still will have to introduce them to the infamous Captain Haddock!!