Suzie, the jellyfish who believes she is a ballet dancer….

Suzie is a lovely little jellyfish who loves dancing!! 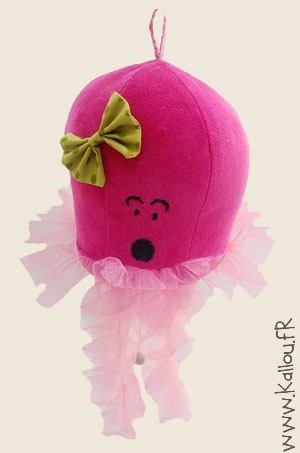 So, as soon as she hears music or plays her music box, she is starting to swing according to the currents.

She is confident; she is as talented as the famous little dancers of the Garnier Opéra. She is wondering why we have never had a ballet dancer jellyfish, hummmmmm?

It’s an injustice, it’s her belief! That’s why she wants to change it  by becoming the first ballet dancer jellyfish.

Wearing her most beautiful green anise knot -the one which is emphasizing in the best way her natural raspberry complexion- she went to the prestigious National Opera of Paris audition!

To while away the time (because it’s a bit far, The National Opera if Paris, when you are from the ocean floor!) she listened again and again her favourite song: The beautiful Danube bleu! (At the same time, she doesn’t have any more choices; Kallou just got one musical box in her stock!) 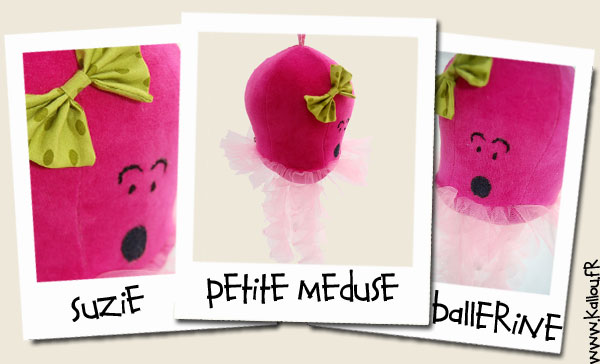 Unfortunatelly for Suzie, his nices light pink tentacles are strongly itchy…and as she danced along the mainstream Australian …PIF on Marlin (Nemo’s Dad for those who were lost in my story)… and PAF on Dory !!

It’s terrible! It was filmed in the flag by Pixar! We can see his “attack” on the screens all around the world!

It’s horrible!!!! She had lost his reputation!!

Bye Bye the Garnier Opéra! They never would like to pay attention to his audition !!! 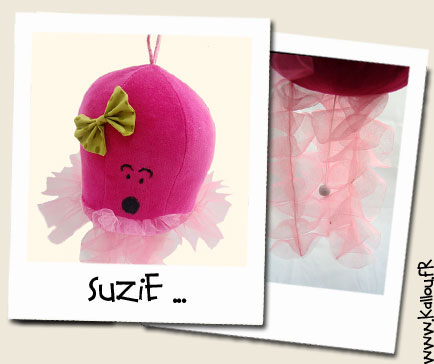 Hopefully, she find sympathizing friends in Aline and Florent! They take care of her, conforted her(… and just a little pull his tentacles with their little fingers!) But she’s very careful not to itch them with his tentacles!

She’s now very happy, singing and dansing only for my little one !!