Hallelujah, we can see again some knitting 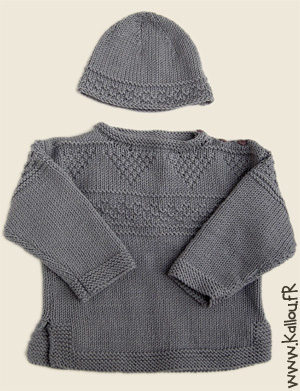 in these green pastures! (Pronounce “Hallelujah” with the American accent, accentuating a lot  the third syllable, as Aline knows so well!)

Except for one thing, it’s not me who has played the needle …but my gentle mother, beloved Manou who is sure like that, that his two beloved grandchild are warm and are cute during the winter (exit old rags so)!

I assure you, I’m still knitting, but for now, I managed to knit a snood as 20 cm in 4 months …not advanced to dress my children with that! (Nor I for that matter!)

Fortunately, the dear Santa claus came with an armful of small packets knitted with love and talent to overcome this acute lazy needle! 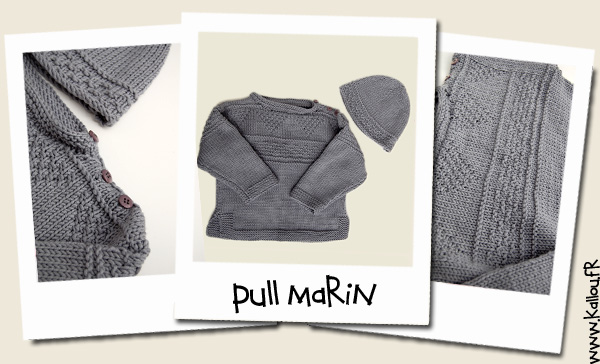 A small soft sweater (hence the title), from volume 2 of “Pretty Wednesday” from la Droguerie. The model is called “On the islands, marine sweater and his hat.” Manou had done a 2 years in size, with Anny Blatt wool .The hat is the perfect size (you’ve aready seen my mini sweety wear it) and the sweater a little bit to big, Florent is a small boy (it will last longer at least!:)).

I like the work  in relief with the purl knit on the right side, it is great! 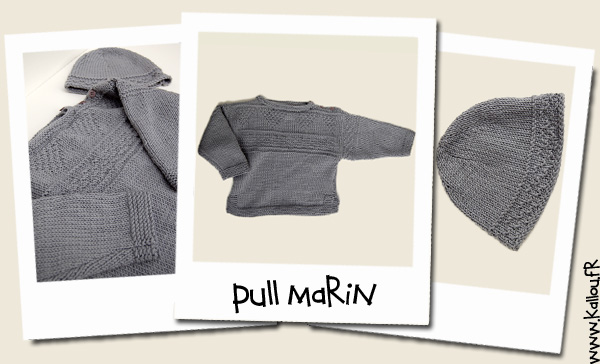 And my little sweety who serves as a model, with its small hat and sweater knitted !

Is he not soooo cute like that? (After all American mothers in the daycare believe that French children are dressed like that! That’s how it prolongs the myth of the “French’ touch”!) 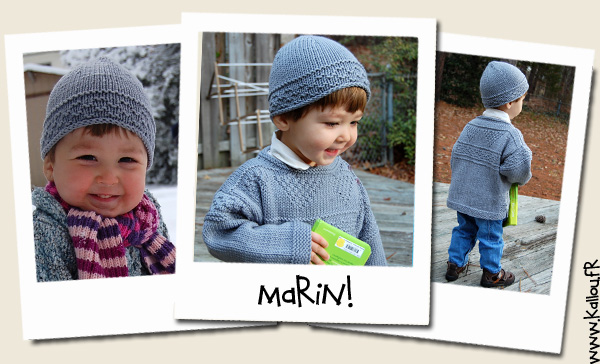 Well , of course, when you take a picture of one of your children, the second come around saying she also wants to take pictures … Follows an intrigue of sweaters and tadam! The two kids pose together, everything is odd, not ironed, but what a joy to do Weirdoes together when I took pictures! 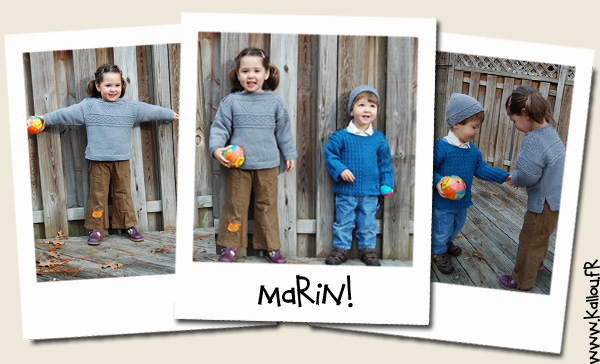 Well, it seems that the gray sweater is finally the size for Aline, and not for Florent! Fortunately, Florent was able to defend his “Papo” (read hat)!

Ah yes, Manou, Alina has a message for you: “why Florent had a gray hat and not me?” ” I know you already got trouzmille knitted hat for me, but I want a gray hat, AS Florent! “

And then as I am, a message to Tata Lou” but I want a third Smurfs, me “(yes, now she knows how to count to 3! and ogle MY Smurfs in my cabinet now!

And another message to Manou, “and for my birthday (she thinks it’s every day apparently), I would like another volume of Caroline,” That one, this, that and that! “

Soooo! Did she believes it’s her birthday every day?? Huumm?!

Thank you sooo much Manou for sweaters!

PS: I’ll tell you about the blue sweater Florent another day, do not believe he’s naked!